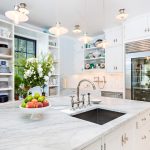 Bostonians have been fleeing to Rhode Island since at least 1636, when exiled minister Roger Williams founded Providence. But while Williams was chased out of Massachusetts for his “new and dangerous opinions’’ (such as separating church and state), it’s scandalously high housing prices that are sending Bay Staters over the border nearly 400 years later.

“Last year, probably 25 to 30 percent of our business was from people priced out of Boston and surrounding communities,’’ said Ben Scungio, an agent and office manager with Mott & Chace Sotheby’s International Realty in Providence.

Click here to read the full article from Boston.com